About the Gallery. "A thing of beauty is a joy forever" ( John Keats). 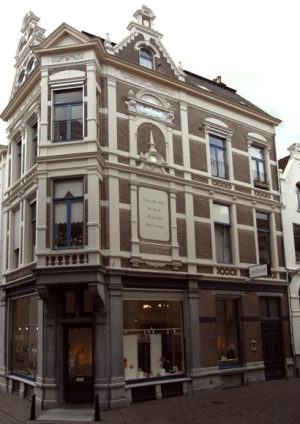 Our gallery was founded in 1980, initially as a means to promote our own art products (graphics and paintings). After having moved over to Deventer in 1972, it was in 1977 that we bought the premises on the corner of the Korte Assenstraat and Vleeshouwerstraat. The shop space was turned into graphic studio and one part was separated to be fitted up as showroom.
In that era Guus Brand was employed in the Deventer Library, one of his activities there was organising exhibitions on the First floor: “Art All Round”. Once there were shown ceramics by Bert Colenbrander in large showcases. That’s how we discovered ceramics. We asked Bert Colenbrander to put his work in our shop windows and sold it from there. In search for other potters we visited exhibitions and also ceramic markets and other events throughout the country. In doing so we became more familiar with ceramics and we started organizing our own exhibitions of ceramics. We started with domestic wares of Dutch potters. Before long the exhibitions developed into a higher level, studio ceramics, ceramic art. We made up a foundation and called it “Kunst & Keramiek”. 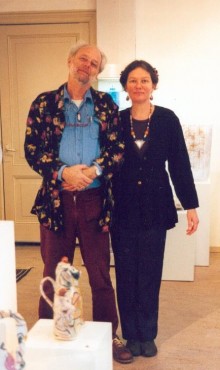 86 an exhibition: ‘Terres de France’ was realised in museum Van Bommel van Dam in Venlo. Hein Severijns was one of the organizers. He made us enthusiast for French ceramics. And in that same year we realised an exhibition with 6 potters from France.
This was the start of a development into a more international orientation, encouraged by the success of this first exhibition of French ceramics more exhibitions followed, of ceramics from France but also from Germany, England and Denmark. In the meantime we travelled around in almost whole Europe to inform ourselves. Museums, galleries, markets and festivals; out of this gigantic potential we distilled our favourites and realised our exhibitions. To show to full advantage the international character of these exhibitions we changed our name into Loes & Reinier International Ceramics, meanwhile we write 1994.
In this period the gallery grew and became leading in showing international ceramics in The Netherlands, more and more collectors found their way to Deventer.
When in 1999 we were honoured by the City of Deventer with The Golden Eagle (a cultural award) we even could proudly ascertain that with our gallery we could support ourselves.
The years 2000 to 2010 formed a highlight in our existence. Exciting exhibitions in this period: in 2001 ‘Expanding our Views’, contemporary British ceramics; in 2005 our anniversary exhibition ( 25 years) with 25 masterpieces by

25 favourite potters; in 2007 the exhibition ‘Japan-Paris-Deventer’ with Japanese ceramics. With personal shows of Claude Champy, Philippe Dubuc, Gilbert Portanier, Jean-François Fouilhoux and Pierre Bayle from France, Inger Rokkjaer and Ulla Hansen from Denmark, Gustavo Perez from Mexico and others we made their names well known in the Netherlands.
Meanwhile the personal computer had introduced itself and in 2003 our website went online: www.loes-reinier.com.
Reinier van de Voorde, December 2014.