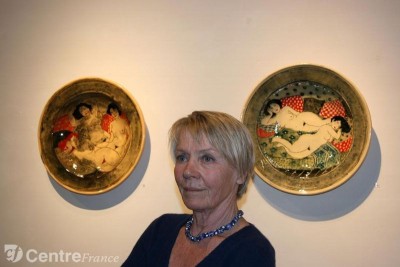 After her studies she did workshops in several ceramics studios in France.
She maintains her own studio in France since 1975, St.Sulpice-les-Feuilles.
Later she moved over to Les Landes; Canenx-et-Réaut.

1976 Participation at the Biënnale of Faenza Italy.
1993 First prize for sculptural ceramics at the Salon of the ENSICA at Toulouse.
First prize for sculpture at  Chateau de Vincennes Paris.
In our gallery Louise exhibitied together with her husband Michel Gardelle in 1993 and in 2000. In september 2007 they once more exhibited here.

Besides as sculptural potter Louise is also still active as photographer ans together with Michel she organizes the Ceramics Festivals in the Abby Arthous in the south of France.

Look fornew items on the Dutch page of this artist.