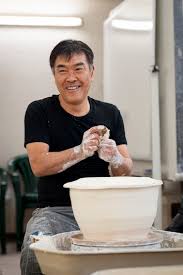 Masamichi Yoshikawa (1946) came in touch with ceramics through his study of design and interior decoration. He was most impressed by the material porcelain, partly because of its whiteness. It was the material with which he wanted, according to his own saying, to write ceramic history. Those who have seen the monumental execution of an order for the Chubu International Airport near Nagoya will admit that he has reached that goal.

Apart from eastern influences his work also knows western influences. When he first visited Europe, 40 years ago now, he was very much impressed by the paintings of William Turner but also and not less by the castles in Europe. You still can see this influence in a part of his work that is very much architectural and shows crenel-like ornaments.

His work mainly consists of containers that he creates on the potters Wheel, or he builds them from slabs of porcelain clay. This non thrown work is mostly geometrical and asymmetrical. He uses the clear white ‘hakiju’ Korean porcelain and often combines it with ‘qinbai’ a translucent light blue glaze. At times he scratches a drawing in the still raw pot , which he fills up with cobalt.

He participated at the exhibition Japan-Paris-Deventer in 2007, had a solo-exhibition together with his wife Chikako in 2010, participated in the celadon exhibition in 2016. Now we present some of Masamichi’s works in our stock.

Works by Masamichi Yoshikawa were collected by the Metropolitan Museum of Modern Art in New York.

Look on this page in Dutch to find some of the works in stock.