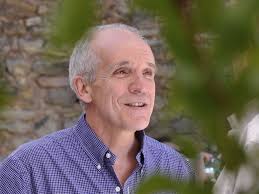 Philippe Dubuc started his career as a painter. He also studied economics and rights. On the age of 23 he discovered clay by accident and he knew he had found his true passion. From that moment on he directed himself completely on this medium so totally new to him. At the age of tenty eight his development came into a rapid when he met the Japanese potter Akiro Tanimoto who stayed in France at the time. The lessons he learned from this slowly throwing Japanese master potter were of crucial influence on his later career.
Philippe’s ceramics mainly consist of thrown stoneware, vases and plates, bowls and platters. But also, constructed of cut clay slabs he makes square dishes, lidded boxes, trays, and recently also free formed vases. All surfaces are the base for glaze decoration. The glazes he uses are rooted in far-eastern ceramic traditions; semi mat celadons, iron reds, tenmoku and other glazes. Some glazes, form a decoration in itself when superstitioned, like the play if lines that occur when a thick white is positioned over a black glaze. The poetic nature of this potter blossoms fully when he is practising brush decoration, with his brushes he develops a graphic language that perfectly fits to his forms. It is all about reaching perfect harmony between form and decoration in the ceramics of Philippe Dubuc. The rhythm of decoration and the composition form the language of his pots. It is not the language of the spoken word but like in music these decorations express dynamics, you can experience them as a voyage of discovery.