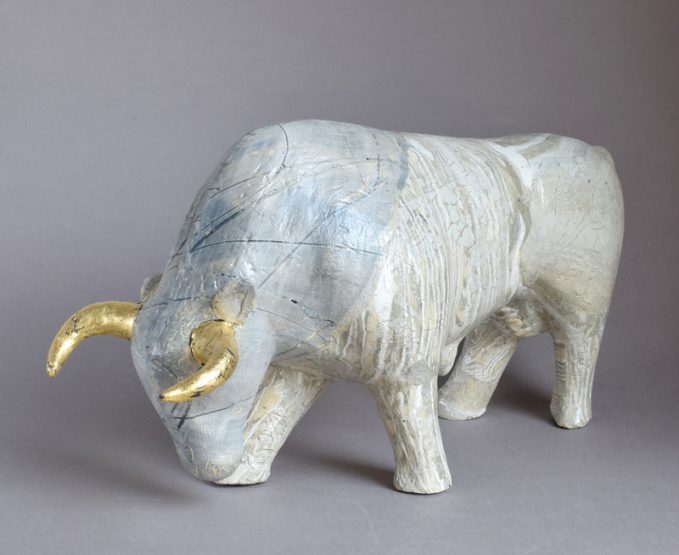 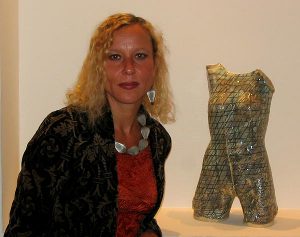 From November 17 to January 11, 2020 we will exhibit ceramics from the German Annette Wandrer (1960 Jena). She received her training as a potter from her mother Ulli Wittich-Großkurth 1977-79, after which she completed her studies at the Giebigenstein Academy in Halle, sculptural ceramics with Gertraud Möhwald.1979-1984. From 1984 to 1987 she worked in her own studio in Jena.In 1987 she settled with Gerd Wandrer in West Berlin. In 2017 they returned to the east of Germany where they settled in Apolda near Jena, a city known for its bell foundry.

Annette Wandrer exhibited once before in our gallery, namely in 1999 when she participated in our contribution to the Ceramic Millennium in the Rai in Amsterdam and subsequently to the exhibition in Deventer.The work then consisted of stoneware objects with decorations with inlays in porcelain and colored slips. Now she will exhibit objects and sculptures with printed surfaces, some vase objects are printed with color woodcuts. The woodcuts are from the hand of her husband Gerd Wandrer (1952 Rudolstadt), who is active as a painter and sculptor. She uses images of his woodcuts on her objects and prints in various layers of color with clay slips until she is satisfied with the result of the composition.

She also uses all kinds of structures, such as fabrics, metal plates, old wooden letters, paper trimmings etc. for her transcripts (Umdruck). Umdruck means that the negative in the objects can always be seen on the inside, the multicolored print on the outside is caused by repeated reciprocating. The ceramic is fired at 1250 ° C in an electric kiln.