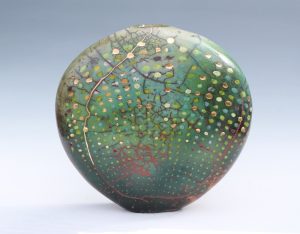 Martin Mindermann(1960, Bremen) is specializing in Raku-fired ceramics for over 30 years. In technical skill and performance he has set new standards in this technique. In the historical technique of Raku the incandescent object is taken from the kiln, than placed in a bed of straw or wood chips where it gets its final character in a renewed firing, the so called smoke firing. A character that revaels its spectacular mystery only after the cleaning from a surplus of soot. Temperature shocks cause glaze cracks, the so called craquelé that is partly hazard partly controlled by the artist, becoming his pictorial language. Craquelé, colouring and form are playing an alternately aesthetic interaction thus creating a unique object. Volume and form are often staged with decorated surfaces. In the actual work he applies patterns and striking visual structures. These are contemplative shapes or series of shapes that he discovers in passing and than explores. Floral objects, such as capsules, figuration, reflections, even patterns on parking’s or on the table cloth  are translated into glaze with help of photography and drawing . Thus a complex aesthetic creation is born that works as a painting in the virtuoso interplay of different layers and placing. Martin Mindermann is able to transfer in a convincingly way the inherent contemplation of his ideas and explorations. The viewer will hardly be able to escape from the intensity and the radiance of his work and he will easily reach a state of calm and thorough insight. Martin Mindermann exhibited before in our gallery in 2002 as part of an exhibition on the theme Raku. 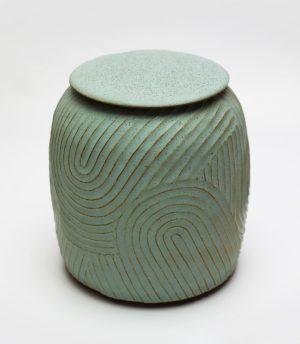 The Korean potter Chanyeon Cho got her education in ceramics in Korea, she achieves her bachelor in Ceramics and Art History in 2002 and her Master in Art and Ceramic Sculpture in 2004, both at the EHWA Womans University in Seoul. In Germany she followed than an education at the Muthesius Kunsthochschule in Kiel in 2006-2009. From 2012 she started exhibitiong her ceramics.

We discovered her work during our first visit to the much praised ceramics event in Oldenburg (Germany) in 2016. What striked and pleased us in her artwork was the effective simplicity of the decoration that she applies on the sober executed stoneware functional ceramics such as bowls and coupes, ceramic boxes and tea and coffee services. The simplicity of her shapes in combination with the execution of glaze does one think easily of an almost Scandinavian easthitic. She herself says in a statement on her work: “Simplicity characterizes my way of working, the type of essence of my ceramics results from the interplay of form, colour and texture of the caly. Harmonious form and usability in an intuitive process.”