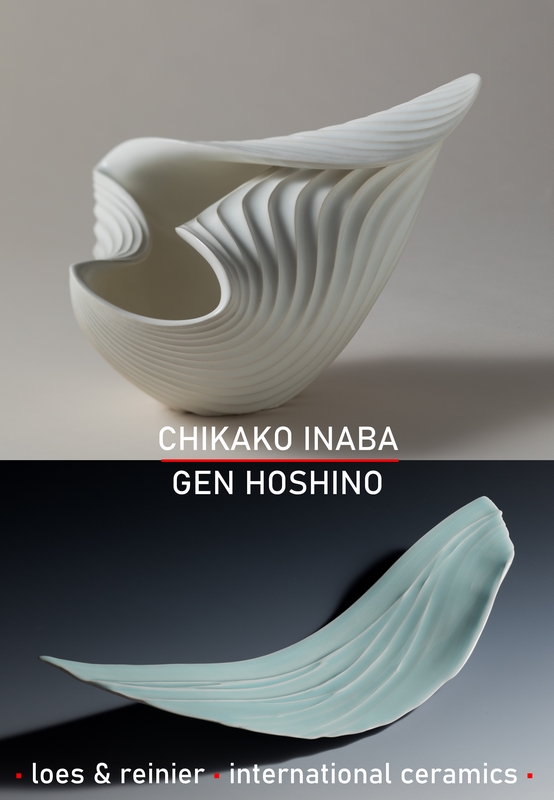 A surprising meeting awaited us when we traveled to the Keramiktage Oldenburg in early August 2019. At the pottery market we met the Japanese couple Chikako Inaba and Gen Hoshino. In good spirits they had taken the plane with a few suitcases full of their latest work to present it to the European public. And it certainly made an impression, the enthusiasts managed to find their way to their stand. It was no wonder that this work made such an impression, because the quality of it was remarkable.

Chica’s white-baked stoneware vase and leaf shapes stood out because of the original design, the fascinating vein relief on the walls of its leaf-shaped vessels and the softly shiny milky-white zinc glaze added to this work, after a second oxidizing firing at a temperature of 1220. ° C, an unapproachable character. During an internship in Taiwan, Chica became fascinated by the lotus flowers and their characteristically drawn leaves that she encountered in the many lotus ponds there. She was so impressed with the graceful veining of the lotus leaves, which distorted the wilting leaves in many ways, that this became a major theme and the ground for the philosophical concept of her vessels.

“During a three-month stay in Taiwan, I visited many lotus ponds. I saw lotus flowers bloom and lotus leaves swaying in the wind. They were really beautiful, so lotus flowers became the main theme of my ceramics. As time went on, after blooming, the flowers would drop and the leaves would turn brown and curl up. The withered leaves look like a grandmother’s hand gently accepting the passing of time.”

Gen’s work also showed a striking and original surface structure on mainly flat and slightly curved shapes that originated from porcelain slips cast in plaster moulds. Fascinated by the behavior of slowly flowing sludge in a curvaceous shape, he is working on an expanding oeuvre of porcelain bowl and saucer shapes, which he provides in the finish with subtle celadon glaze.

“Ceramics are made from clay and fire, clay becomes plastic by moderately adding moisture. Yes, ceramics also need water. Just like all other organic substances on earth… When more water is added to the clay, it becomes slip and takes on a new expression. It is both sharp and soft. The slip dances and flows. I record the different appearances on the barrel. And ultimately I want to capture the necessary element of the ceramic, ‘water’, as a characteristic form in my fired work that is created by the use of slip.”

More information about both artists can be found on their personal page. Click on artists in the menu and find them there by their names.