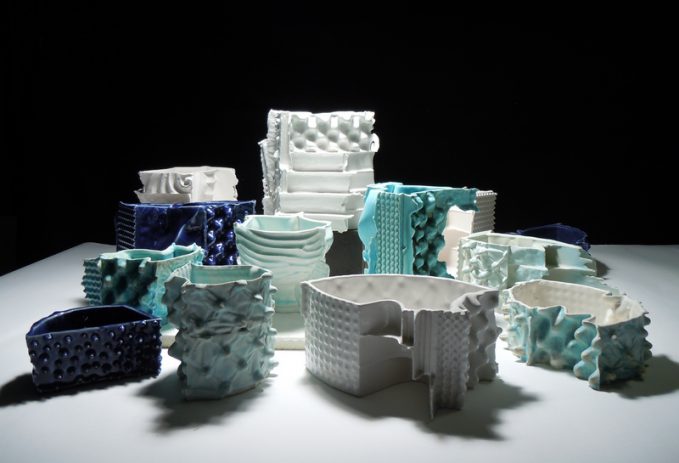 From 3 February until 23 March 2019 we will again exhibit Works made by Johan van Loon and his partner Gökhan Taşkin.     Since his participation in the exhibition with Nocholas Homoky and Gustavo Pérez in 2003 we have shown the work of Johan van Loon at several occasions. Consecutively in 2008 in a showcase exhibition, in 2010 in a showcase exhibition with prototypes moulds of design he made for Rosenthal Studio’s and an exhibition of recent works in 2011, this time together with Gökhan Taşkin who showed exuberant ceramic sculptures and some of his abstract expressionist paintings. Johan van Loon was honoured in 2016 with the ‘Van Achterbergh-Domhof Prize’.  (Van Achterbergh was a well-known Dutch collectioner of ceramics who ’s collection counted over 4000 works) In the Jury-report  he was appointed “patriarch of modern Dutch ceramics”. Van Achterbergh himself typified Johan van Loon  at the time (the 60’s of the 20th century) as “a quick silvery youngster, elusive and with irresistible charming qualities. A Potter with a nervous drive and enough  guts to put chance to his hand. Someone with countless promptings, mysterious shenanigans, a chameleonic adaptability, an unsurpassed daring approach and an often crazy entrepreneurial spirit “. Take a look at the recent and completed work and you will agree that here is not exaggerated and pay attention: we are now writing 2018. This ‘youth’ now has 84 years!

Gökhan Taşkin (1964) was initially educated as fine artist at the Faculty of Fine Arts of the University of Ankara( 1984-88). He gained a bursary to develop himself further in Germany and specialised in Ceramic Design (1989-1997). In 2000 he was invited to come and work in the EKWC (European Ceramics Working Center) in Den Bosch. From that period on he started exhibiting in the Netherlands, mostly together with Johan van Loon. Initially showing his abstract painting but gradually ceramics take a more important place.

At this coming exhibition there will be work on show that he did make in close co-operation with Johan. He uses and re-uses for this new series of work the plaster moulds that Johan used for earlier work as well as plaster seals and imprints of the surrounding nature, structures he wished to save for later application in his ceramic work. With the use of five of these mould and seals he is constructing unique casted objects. By variing the place of the parts he reaches sets of 25 unique objects these you can arrange into a latin square or Sator square. After biscuit firing these object will be finished partly with glaze but also there will be unglazed parts to emphasize the many variations in surface structures. This finished project will be presented as “Segmentation of Johan van Loons Structures”. Accompanying photos illustrate this “Work in progress”, see here below: