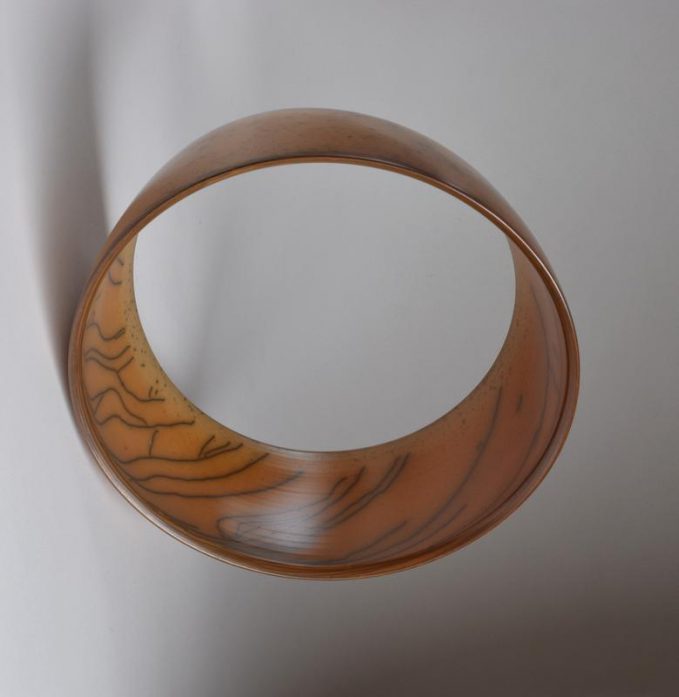 Terra sigillata is one aspect of the contemporary practice of creating ceramics that has fascinated us almost already from our start as gallery owners. Master potter Pierre Bayle (1946-2004) for instance was dedicated to the technique. When we got the possibility to exhibit his work in our gallery we took the opportunity with both hands. Thus we realised two times a wonderful exhibition(1990 and 1996) of the ceramics of Pierre Bayle. He was born and has always lived in the Mediterranean. Here you could find traces in the shape of red shards of this Gallo-Roman slip covered earthenware everywhere in the soil just under the surface. This could have inspired him to apply himself to this way of potting. 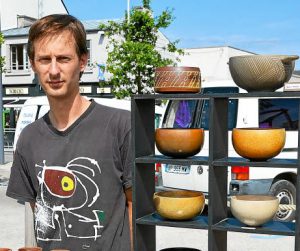 Great was our surprise when in 2007 on the “Journées de la Céramique” in Paris- St. Sulpice we met a young potter who also was completely involved to working in this technique. This encounter with Mathieu Casseau (born 1977) has let to a first exhibition of his ceramics in 2010.

A few years later, in 2018 we met him again on a potters market, this time in Diessen in Germany.  Once more we were surprisingly pleased, this time by the development we noticed in his recent work. Did he show in 2010 mostly vases and bowls, in Diessen he had enlarged his work field with wonderful coupes and lidded boxes. A wider variation in vessel shaping, non functional spheres and bowls in a range of warm colours too.

The technique of sealed earth, also called terra sigillata is named after the Roman origin of this earthenware technique. It is characterized by the lively crackles that inhere in it. The secret of terra sigillata hides in the coverage of the thrown pot with a refined purified clay slip that is obtained by an almost chemical process of sieving and sedimentation. Mathieu practices wood firing without biscuit firing. He fires his work once at a temperature of 980° C. During the firing process a perfect vitrifying is achieved with the appropriate clay as basis. The slip melts into the surface of the careful polished vessel.

Mathieu chooses his material very carefully, he finds the clay on walks through the region. By testing, he selects his finds, this clay to throw the pot, that clay to serve as slip. The engobes are developed from heavy, fat clay as used for dyke construction. The refining process takes some days to a few weeks; the clay is diluted with rainwater, sieved and clarified in a long process of settling and drying. The longer the settling, the finer and vitrified the result will be. An example: 2 kg of clay brought from the Auvergne mixed with 12 liters of rainwater and some sodium silicate only gives him a few deciliters of slip. “My game is pretty simple, a touch of chemistry and much curiosity” says Mathieu.The leading thread in his work is the tension of the line, as well the pot contour as the crackling that appears during the firing process. He puzzles whether the movement of the  crackles come from  the pot form or from the thickness of the slip. These crackling has the freedom to appear quite voluntary while they develop themselves on the surface of the vessel.But several factors determine their appearance: the throwing clay used, the sort of slip and the thickness. Mathieu applies the slip in a way to further the development whether or not. The thicker the slip the more they will develop. A thin fine slip will cause only points on the surface of the piece.. Some sorts of throwing clay will cause big spiral crackles directed in the sense of throwing, other will be directed by the tension caused by the flames going through the pots in the wood kiln. Wood firing with alternating oxidation and reductive atmospheres feeds the work in a different way as firing with gas. Slips will be subtly enriched by the flames that pass through the pots in the kiln.A firing takes 12 hours starting early morning till the end of the day. Smoke firing is possible too at the end of the firing to make the crackles black, just as some parts of the pots. Unpacking will have to wait until the next day. Each piece taken from the kiln will be thoroughly inspected and described in a note book together with the type of clay, the slip recipe and the position in the kiln. Fond of technical innovation, the potter is permanently searching for perfection. With the practice of throwing pots in combination with the creation of original slips, he is reaching for  a mastership in this discipline just as his great example Pierre Bayle.

“After having assimilated some techniques on the orientation of crackles and the colour of the slips on my big vessels, I nowadays also enjoy practising on my bowls this knowledge I obtained.”

Mathieu Casseau is realizing tense, sober vessels that form a perfect base for his exigent slip technique. This shiny product lets itself be revealed in thin layers on a thoroughly polished surface. In a palette of warm colours that come from the natural clay tones, the black of the smoke fire is drawing networks of crackling in an accidental line play. The exclusive use of clay, a material of absolute simplicity, is enriched and glorified by this application.The elegance of shape, the fine decoration and his technical mastery defines him as a rare talent in ceramics.

Pictures of the works that are present in the exhibtion, you will find on the Dutch page. They will appear in the first week after the opening of the exhibition. 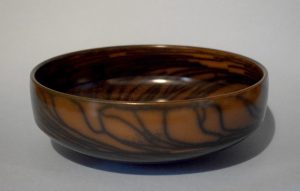