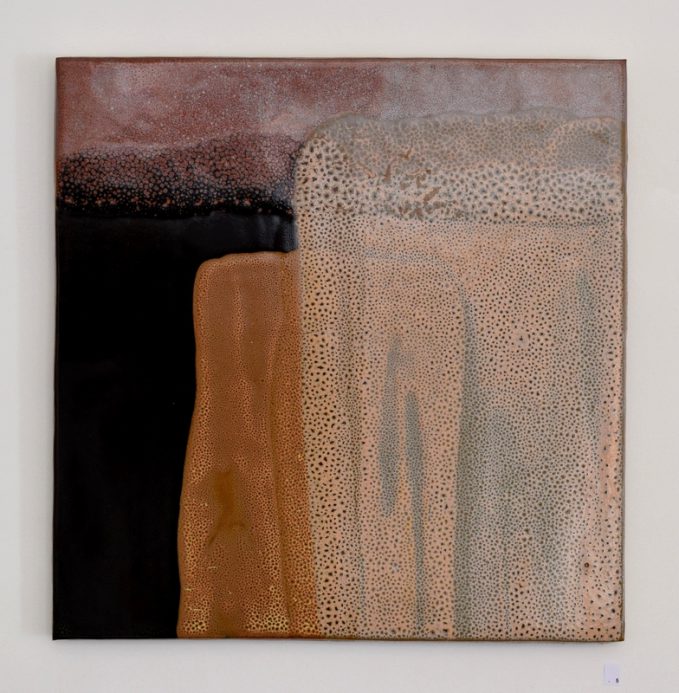 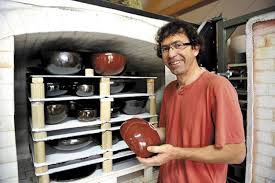 From September 8 to November 2 2019 the French potter Matthieu Robert has exhibited recent ceramics in our gallery.

Matthieu Robert  (1962) has become a potter by a two fold initiation. First because of growing up in a potters family, later by getting his degree  BTS(Brevet Technique Supérieur) in industrial ceramics in Vierzon in 1983, followed by a two year experience in the technical centre for architectural ceramics in Paris. Then in 1986 he founded his first studio in Poncé-sur-le Loir that also already was a centre for technical assistance  of the arts and crafts initiated by his parents both potters by profession. So after this merely technical orientated education he now plunged into the development of an artistic career .

He mastered the process of working on the potters wheel and rediscovered that artistic sensibility with which he has been surrounded during his youth.

He specialized on the development of his own glazes, inspired as he was by the results of  glazing research ( described in ‘Le scret partagé’) realized by Daniel de Montmollin who was an authority on glazing in France.

Right from the start of this individual artistic career he demonstrated his great technical skills, namely a sharp insight in the material and the mutations caused by the process of firing. Also from the start he knew to realise brilliant glazes, among them the most refined, those who are created by the transformation of mainly iron oxides and that led to tenmoku and to the so called oil spot glazes and hare fur glazes too. With this glazes based on iron oxide eh consciously chooses for a sustainable, ecological justified working method. With iron oxide as a base he is more than able to express himself and he is obtaining with it the colours brown, red and orange and also green and blue (seladon). With a strong will to invest without any hesitation in his state of artistry and with the intention to reach an inner balance he has come to a new development leading to architectural well-balanced shapes that combine accuracy, out weight forms and refined glaze and that go far beyond domestic or decorative ware. Experienced glazer as he is, he also is experimenting with the composition of clays to find the right compound for his shapes, mostly open vessels which he perceives as generous for him and that answer to his will to be in harmony with nature.  In his new creations he has chosen a clay full of clogs with the intention to make bigger vessels. He also plays with the contrast between unglazed stoneware outer surfaces and the as always very refined glazed inner surfaces.

Mathieu Robert is a known potter in our gallery, his first exhibition was in 1996 and we have presented him in our permanent stock ever since. We presented a solo exhibition in 2010 together with Mathieu Casseau (who will return in our gallery in the spring of 2020) and he participated in the theme exhibition on Celadon in 2016.

On the Dutch version of this page you will find a number of photos of unsold works that will be available for some more time from the gallery.