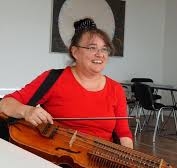 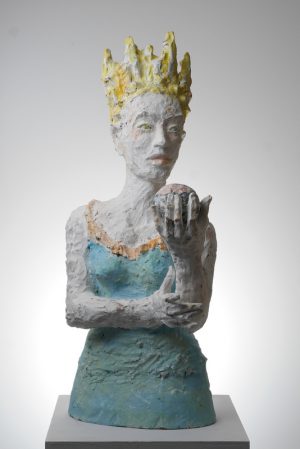 Nathalie Schnider-Lang (CH Zurich 1965) will exhibit for the 2nd time with us. ( the first time was in 2016). She exhibits polychrome figurative ceramic sculptures. She models her human figures from soft clay that requires a certain and smooth processing during the modeling. The use of color plays an important role in the perception of Nathalie’s work. In the post baroque western culture, sculpture usually has no color, i.e. the image has the color of the matter; the color of the stone, of wood, bronze that is only stained by applying a patina. The images of Nathalie, however, are polychrome and then very specially colored in clear pastel colors (without applying black) that further reinforce the dynamic character of the images. The light pastel shades bundle the light and appear to make the figures more light-footed. The earthy character of the ceramic is pushed into the background. The frequently used yellow, orange and bright light green bring a lot of light into the space around the image.

Her method can be compared to that of a painter. The sculptures that are modeled from red-baking stoneware clay are painted in raw state after they have first been covered with a ground layer of porcelain slip. The coloured porcelain slips and glaze are mixed on a palette just like a painter does, and applied to the fairly coarse clay surface with quick notes. That looks more spontaneous than it actually is. Because every tone has to hit the mark, she is careful not to spoil it at all. She states that coloring sometimes takes more time than sculpting the image. Nathalie’s figurative sculptures are realized by sculpting very soft clay by hand in swift touches and by quickly forcing the chosen figure into the desired shape with the fingers and thus bringing it to life. Just like a choreographer determines the movement of the dancer and turns these into an emotion. The music that she is listening while working plays a major role in this. That music, classical, baroque or contemporary ethnic music often determines the atmosphere of the personation. Nathalie is a musician too, she plays several instruments and is a choir singer in several ensembles. 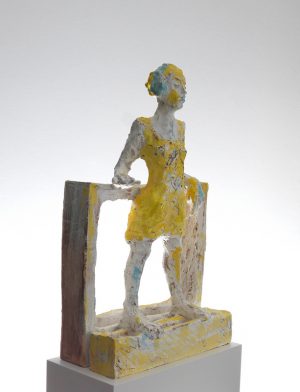 “The music gives me a lot. I especially like the ensemble playing, where you work together on a sound. A lot is happening on the emotional level. As with ceramics, you can spend a lifetime occupying yourself with it without pervading everything. What fascinates me the most is that the music addresses the emotional world so directly. Without a word and without matter.” Her mostly small sculptures are freely constructed from soft clay, the larger sculptures she builds from clay rolls. Technically, her images are fired at a temperature of 1100 ° C in a salt kiln. (low fired salt glazing).

Nathalie Schnider-Lang was trained in Lugano (CH). After her studies she started in 1985 as an independent ceramicist.  From 1992 to 1995 she further studied and graduated from the Staatliche Fachschule für Keramikgestaltung in Höhr-Grenzhausen. During this study she was inspired to engage with the human figure: “After throwing almost exclusively for about 10 years I met Ruth Eigelshoven  who just came back from Thailand and she gave us, at that time technical students in Höhr-Grenzhausen, a workshop in Asian modeling technology. I was absolutely thrilled!I always loved to throw, but suddenly I felt like I had found my place. It immediately triggered something in me. In addition, you could realize large formats with this technique  and I loved to work with, and paint on large formats.This type of modeling was a turning point.” Since 1995 she Works and lives in Nördlingen in Germany. 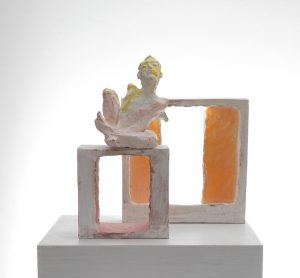 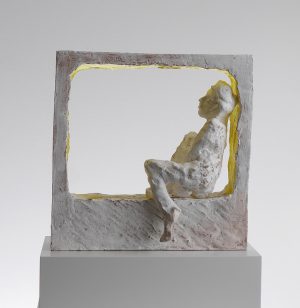 About her actual work she says: “At the moment I am increasingly concerned with people in space and environment. Painting sometimes creates a bridge here to reflect the outer world on the body. In general, I’ve been more concerned with the figure in space lately. It’s about finding your place. In the real and figurative sense. (your space where you feel good, your place in life …)”

All works in the exhibition are depicted on the website. Please look at them on this page in Dutch language