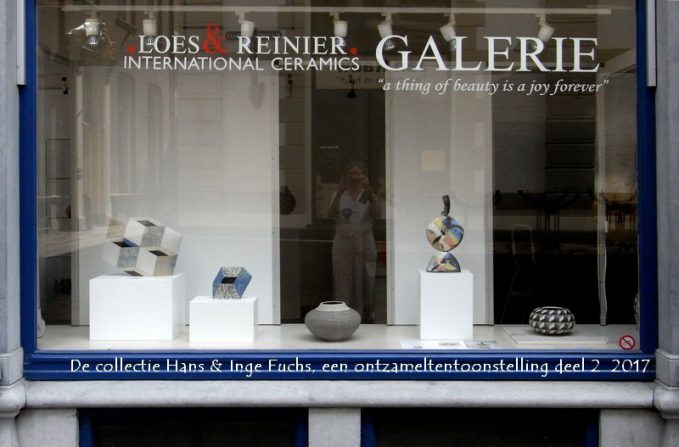 te the following:  Hans and Inge Fuchs started collecting ceramics in 1988. They were acting quite fanatic, collecting became a demanding passion, they visited galleries and pottery markets all over the country. Thus they also found their way to Loes & Reinier International Ceramics Gallery soon, as is witnessed by some early works dating from 1989.  The Fuchs collection became very diverse: not only ceramics but also paper art, constructivist Perspex objects, and ethnic silver jewellery.

Associating preferences of man and wife the collection grew in some 28 years to the amount of about 1300 lots of ceramics. Looking forward they both concluded that in future their collection will inevitable fall apart. They thought it being better to take action by themselves and decided to start de-collecting. Part by part they bring ceramics from their collection into the attention of the amateur. Earlier and in a different context L&R International Ceramics showed a number of boxes in a ceramic box exhibition in 2012 and a series of works by the Belgian artist Tjok Dessauvage in 2015 and thus about one hundred works in 2016  and in 2017 created by ±40 potter artists.

For this winter exhibition is chosen for the presentation of  Dutch(16), other European and ceramics from Australia and USA. Brought together are again about a hundred works by 40 potters this time. See for the pieces that will be presented on the Dutch page of this exhibition.