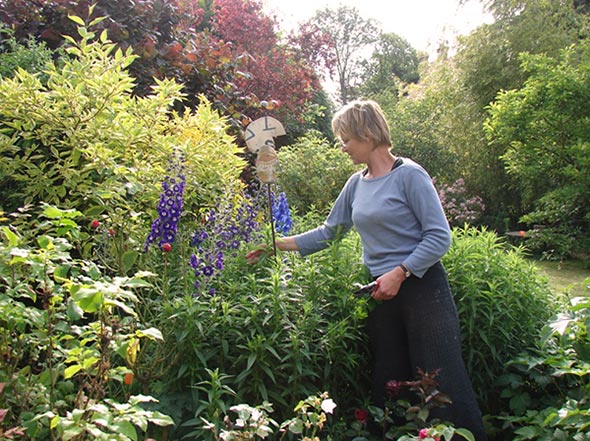 Nani Champy-Schott specialises in making Raku ceramics. In the beginning she limited herself to bowls and dishes that could be as wide as half a meter. Often they were executed as double walled object. Her shapes are not thrown but built by hand or made from clay slabs. It are singular forms that derive their charm from sober beauty. The tea bowls couple at the tradition of the Japanese tradition of the Tea ceremony.
Gradually the shapes become more complicated, not only double walled but also complex forms appear, bowls as Siamese twins, three partitioned dishes etc. The most recent work also shows lidded boxes that are really surprising when opened. Not only the two parts fit perfect like the parts of a mould, the inside container shows surprisingly enthralling colours. A story in itself tells the glaze she is applying. Distinctive for her work is a glaze that spreads over the surface as a thick gel, sometimes pearling into thick drops as if it doesn’t really want to stick to the wand of the pot. With glaze she experiments much, the quick firing of the Raku technique lends itself to this easily. There is much loss but especially the failures lead to wonderful results