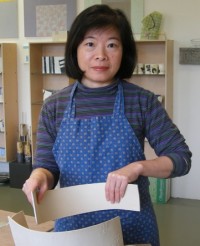 Yuk Kan Yeung was born in Hong Kong (1959). She studied fine arts at the ‘Chinese University of Hong Kong’. In 1986 she moved to London to start a study in ceramics at Goldsmiths? College. In 1987 she settled in Breda (NL) where she applied herself to creating ceramic objects in porcelain.
Yuk Kan has chosen porcelain as her material, not for its transparency but more because when rolled out into a plaque or into a cylinder it is a perfect three dimensional base for graphic or poetic expression. In doing so she integrates different artistic talents in a ceramic form. In Hong Kong she practiced the Western etching technique as well as Eastern calligraphy, besides that she studied Chinese literature too.

With the coming exhibition titled ‘Voyage’ we will present the work of Yuk Kan Yeung for the 2nd time, formerly she exhibited in April 2003 where after she travelled back to Hong Kong, the city she left 7 years before. The recent work is coloured by memories and emotions. She herself says about it:
“There are many faces at a big city, a city built full to the extreme, you will encounter many surprises. In the narrow space between the skyscrapers unexpected compositions are formed, it is not especially beautiful, but very interesting and sometimes rather surrealistic. This all comes together with colourful advertising signs, traffic signs, the weathered walls fully drawn with colourful stripes of old torn posters, the endless reflections on the glass windows, and then the port, the sea where I long for. They all form a sort of collage in my sub consciousness and this sparkling cocktail I want to express in my work. Thus I started the new series titled ‘Voyage’.

I still use porcelain as my basic material although the format of my vessels has been enlarged and the forms have become more complex. They are an assembling of porcelain slabs of different size and structure. By the irregularity of the plates a surprising form is revealed. I use my intuition to explore these forms, not by planning but by letting it develop during the process of the making. Once when a form is realized I start drawing and painting. The lines and colour fields become one with the form, thus creating a three dimensional painting.”