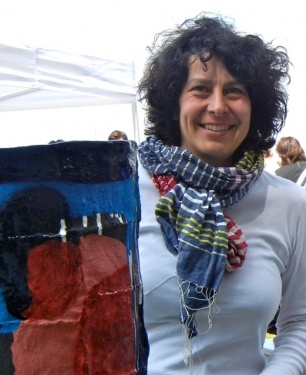 Elke Sada (1965) first trained as a chemist, followed by a career in chemical research in Germany, the USA and Italy. During her stay in the USA she came into contact with ceramics through leisure activities through drawing and painting courses. In Italy, the penny became definitive during a turning course in Tuscany. Elke left for England and enrolled at the University of Bath and 2 years later at the Royal College of Art in London where she obtained her Master of Arts in ceramics and glass. In 2007 she moved to a studio in Hamburg. Every Sada’s primary inspiration is painterly. She paints spontaneously with colored clay sludge on plaster slabs that serve as her canvas. The painting is then rimmed with a dike of clay, which is then followed by pouring in self-assembled clay. After drying, the rim is cut away and the leather-hard clay slab where the sludge has adhered to is now further processed, cut and shaped into a container or dish shape. That is how the capriccio series came about.

Elke Sada exhibited earlier in our gallery in 2014 (with Karin Bablok); in 2017 she participated in the exhibition of plates(dishes) and wall objects.

Works by this artist you will find on the Dutch version of this page.