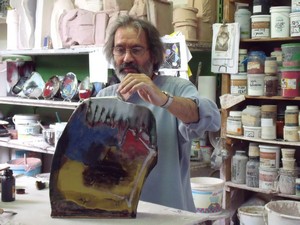 Eduardo Constantino was born in 1948 in Portugal. He took lessons from master potter Guilherme Barosso.
In 1976 he moved over to France and started exhibiting his work, first mainly in Brittany where he founded his studio in 1991 in the town of Quimperlé. His work is quickly noticed by the French ceramic magazine ´La Revue de la Céramique et du Verre: articles in 1994, 2000 and in 2008. With this latest article came the great breakthrough as painter on ceramics notably the title of the article in ’94.
The development of Eduardo is easily to be read from the work itself. From traditional vessel forms made in faïence with free style slip decorations in ’94, via simple porcelain pots and vases that became the carrier of totally abstract painting in a colourful palette with many primary colours in 2000, to the complete autonomous stoneware and porcelain shapes of 2008 until now. Still containers but fully integrated with their painting which manifest itself as a musical composition in which colours seem to be radiating. In the work of Eduardo Constantino it is not about the fascination or the development of a motive, the importance is in the spontaneous gesture where the compositions are applied with and at which you can see he is a real painter on ceramics. With that he ranges himself among the great in this form of art: Jean-Paul van Lith, Gilbert Portanier and David Miller.