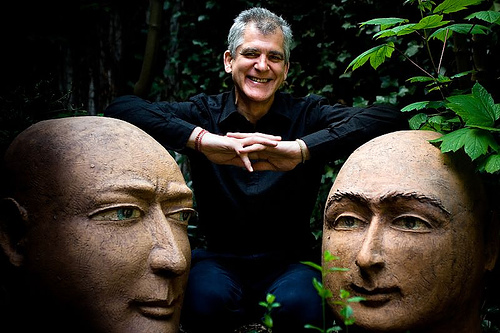 Luk Versluys (1952); studied justice at the University of Leuven, but soon after that he made ceramics his profession.
He started his own studio in 1976.
In 1980 he wrote HET KLEIBOEK (the Clay book), followed up in 1993 by HET ATELIER (the studio).
His work is purchased by the province of Flemish-Brabant and in numerous private collections in Belgium and abroad.
Luk Versluys earlier had an exhibition in our gallery in 2003.

Luk Versluys made himself known by writing Het Kleiboek (the Clay Book -1986) and Het Atelier (The Studio -1994) in cooperation with Lucien Tinck, A Belgian potter too. The latter issue is a collection of studio impressions of 12 Dutch and Belgian potters.
Apart of these publications he is working in his own studio since 1977. He is an autodidact in ceramics after studying laws. The work of Luk Versluys is many-sided; he practised making table ware which he sells in his own shop in Leuven. His main work is however figurative sculpture which is the work that will be in the exhibition.
These sculptures stay unglazed or they are coloured with body stains or slips, but mainly the remain in the colour of the fired clay which varies from yellow to terra. The surface has its original texture caused by the modelling with scratches, dents and stamped relief. Sometimes text is scratched into the surface, it seems to reveal something about the meaning of the piece. They surely give the sculptures a poetic image. The figures are standing alone or are couples and they are sometimes accompanied by enigmatic attributes such as a written stone on the head, a horned head….. Also the symbiosis of man and animal is a possibility, from this we can see a certain interest in mythology and the classics.