Education completed at the Nara University of Education in 1996, followed by further education at the Pottery and Design Institute in Tajimi City up to and including 2003. Begins to exhibit from 2003 onwards mainly in Japan later also in Korea, Taiwan and in Finland (2013) and the Czech Republic. In 2018 In Oldenburg and Gmunden (A) Gen Hoshino makes molded dishes and vases in porcelain. On its surface, he applies free-motion porcelain slib trails, which we find as relief marks under celadon glaze. He shapes his dishes in an elegant leaf shape or he cuts it in an inventive free form, a shard, a wing. His beautiful celadon gives his work a very lively appearance, the color changed with the light and the kind of light in which you look at it. In candlelight this is deep and mysterious in sunlight airy and ethereal.

“Ceramics are made from clay and fire, clay becomes plastic by moderately adding moisture. Yes, ceramics also need water. Just like all other organic substances on earth… When more water is added to the clay, it becomes slip and shows a new expression. It is both sharp and soft. The slip dances and flows. I express the various appearances on the vessel. And in the end I want to capture the necessary element of ceramics, “water”, as a characteristic shape in my fired porcelain created by the use of slip.”

Gen Hoshino (1973- Kyoto prefecture) is a son of parents who are very well known in the ceramics world. His father is Satoru Hoshino, Kayoko Hoshino is his mother. Gen Hoshino too was trained (2000-2003) at the Tajimi City Ceramic Design and Technical Center in Gifu Prefecture, the area where most ceramics are produced in Japan. What he learned there had a decisive influence on his development as a ceramic artist. He learned to be aware of the meaning of creating by using clay as a material, what ceramic art is and what the usefulness and beauty of crafts.Initially he made hand-shaped sculptures in the coiling technique.He found his inspiration in sand dunes and in the ripples of wind and water in the sand. Because his famous parents worked in the same technique, also building their sculptural objects by coiling clay rolls, he found it difficult to find his own style of work. 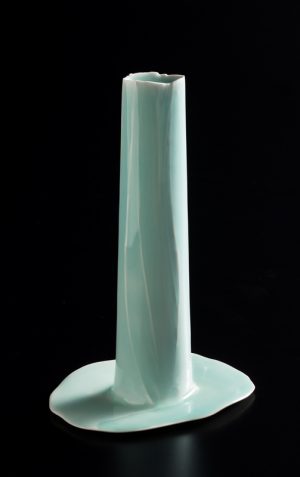 A view on his own path presented itself when he started working in the technique of making functional porcelain forms in plaster molds. By chance, pouring thickened old slip cream into a new fresh bucket, he discovered how to create those ripples in slip. From that day on in 2009 he focused on the further development of this technique, filling a plaster mold with slip, leave it for a while so that it thickens and then removing the excess slip with a spatula. The plastic slip marks left by the spatula form the decoration of the molded piece, a round or square plate. But that decoration was only applicable to the inside surface of it. It took him a year before he could also apply this form of slip decoration to the outside of a  molded vase or bowl. In addition, he experimented with, among other things, water-glass and sodium silicate to master the texture of the slip marks, one of the most difficult aspects of his work. A step further he went by no longer using a round or square plate, but by cutting the molded form in such a way that the flow of the slip track became the leading principle. Thus he created objects that are reminiscent of wings, shields or leaves. Another progress was obtained by cutting irregular notches into the rim of the flexible rubber spatulas with which he wiped the sludge, allowing more nuances in the surface decoration.Finally, Gen Hoshino’s objects are finished with a running celadon glaze that varies in color as it is applied thinly or thicker, from a thin light blue to an intense blue-green like we know from classical Chinese vases.