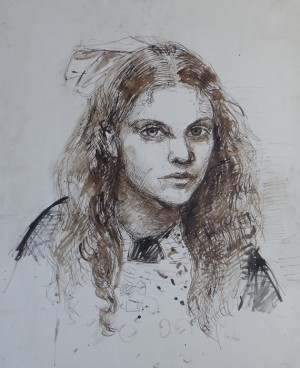 Lies Was, drawings and watercolours.

Lies Was was born in Leiden. She was educated at the Royal Academy of Fine Arts in Den Haag from 1969 -1971.
She also followed courses at the Free Academy. She lived for most part of her life in Wassenaar and was from 1975 until her death an active member of the artists association Pulchri Studio in Den Haag.
In the collection of the city Wassenaar, with as main core Works from the “Nieuwe Haagse School”, several Works by Lies Was found their place.

Lies Was has been working for years in the studio of her mentor Kees Andrea that was situated in the old country seat “De Voorde” dating from 1799. Other inhabitants of this special studio community were Livinus van den Bundt, the light artist, Herman Berserik, painter, Ton Hogendoorn, illustrator and Arja van den Berg also painter and graphic artist. Arja wrote about it as follows: “In 1970 we, Lies and I, met in the big mansion in the park and in the garden, working. All days and sometimes from the darkness in the morning until the darkness of the evening. Each in their own space, She with Kees Andrea and me in the old kitchen, dressed in aprons made by our mothers, we were only early 20 years. When spring came we drawed each other sometimes in the wild garden of the big house, underneath the old beech trees amidst the grasses, men high cow parsley, spurge and snow whites. Her attention was directed to these flower motives, and that’s how she was seen ever since.
Serious, thoughtful, always absorbed in her own work, in her own pitch she talked about her wonderment.”After this period in “De Voorde” Lies moved over to the gazebo near the country seat “De Pauw” in Wassenaar, whilom
the studio of Queen Wilhelmina. There she has worked for years until her health now longer allowed her to work.