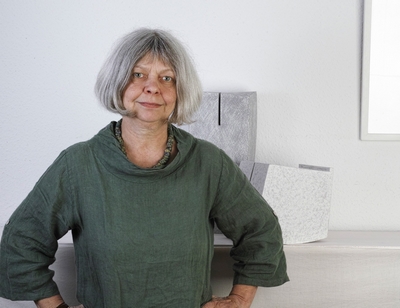 It is amazing to see how defining formal languages ​​permeate and continue to have an effect on the ceramic vessel genre. Mechthild Poschlod comes from the “Kasseler Schule”, once undogmatically founded around 1960 by the revolutionary ceramist Walter Popp at the art academy in Kassel and later continued there by his student Ralf Busz, teacher in turn of Mechthild Poschlod, next to the Korean Young-Jae Lee. Mechthild Poschlod’s works are soft, calm, dignified and yet noticeably defined by a grain of ‘Kassel’: powerful and perfectly turned, thick-walled yet balanced and delicate. Usually small vessels – footed bowls, bowls, plates, vases with kinked walls – covered with mostly monochrome, noble glaze, matt or glossy, sometimes with a closely interwoven crackle, all together testifying the will to shape and master the profession. Nothing is left to chance here; sensitive, nuanced decisions prevail. How aesthetically accurate a hard fracture has been drawn in the silhouette of a vessel, how the rim and edge are emphasized, where the structure interrupts the twisted shape while continuing harmoniously, quite apart from the rich but subdued colors obtained exclusively from the glazes are due to oxidative firing or the stability of a vessel, even at a narrow base, thanks to the internal mass distribution – such a fine, even subtle formulation of the vessel has become rare today and must be followed in its steps, enjoyed as a composition are whole.

This almost classically modern position, which is now so rare, is even more emphatically and explicitly expressed in the sculptural works composed of clay slabs: strictly composed, elongated, reduced box or cube objects with whitish engobes and finally sanded and polished surfaces. ( text, free to Walter Lokau)